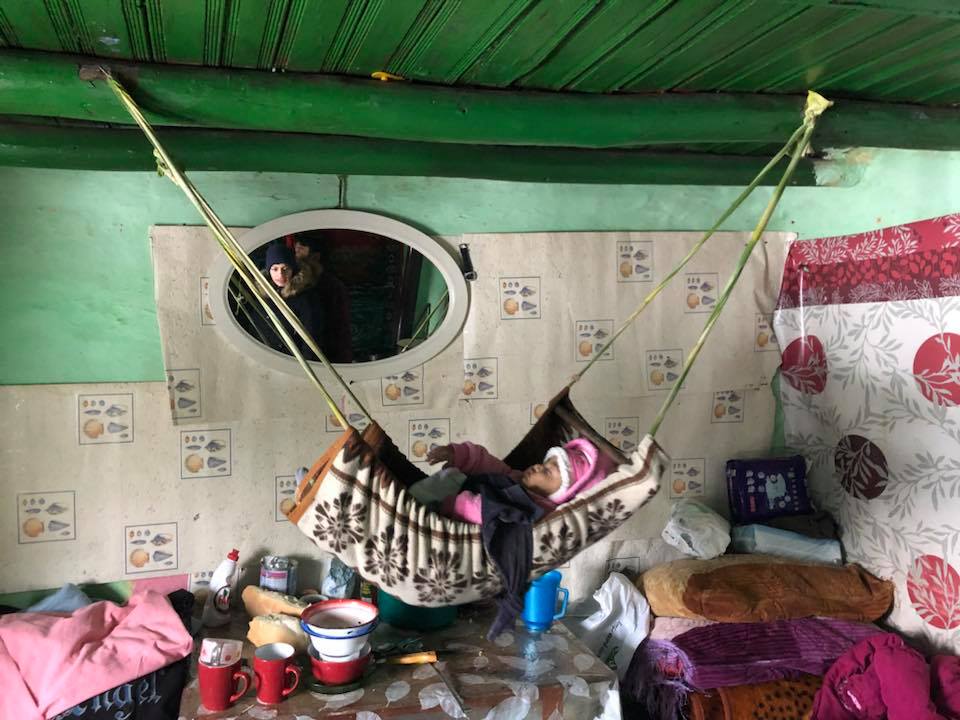 Yesterday and today we made preparations for the group from Bucharest that visited us today. They ordered 50 packages of food to go to the villages with them today: potatoes, meat, flour, fruits and others. I reached families I haven’t reached in a long time and the intervention was a blessing.

Especially when you get home to the man when he has no money in the house and tomorrow he has to go to the hospital… or buy something urgent… or pay for the light. In urgent cases and where we have security, we also intervene with money. And believe me, I’ve never believed in my life that 100 RON can change a person’s mood so quickly and can mean so much in a family. Yes, that hundred RON that we spend on food in the city, here can make a difference for several families together.

I found in a house an ingenious swing made by a father: some cords hanging from the ceiling beams held a blanket. In the blanket, a child protected by a cord slept soundly. Here around the houses you don’t see children in light clothes, until spring they warm up with layers of clothes.

In one of the families that does not have a fountain and has to bring water from far away, the snow outside is a blessing. They melted the snow and so they washed their clothes. How ingenious we become when we have no other choice.

Maybe that’s why it was good that I didn’t get everything I wanted when I was a kid.

In today’s mission, I also met a little girl whose heart clung to me. Sapphire. With piercing black eyes, she asked for nothing. She was happy to be held. “She’s an orphan,” the woman who was holding her tells me. “I found her 4 years ago in a shopping cart, she was abandoned, we found her crying. We took her to our home. Later we met her mother who told us that we could keep her beacause she is going to marry someone else. And the father of the child is in prison. “

Our team thanks for the love: to all those who send children’s clothes, food, money to buy wood. Your intervention is a miracle in the life of someone from the pictures I keep posting.

Your donation can make a real difference in the life of a family from Vaslui.

Thank you for your love!

*Use this number only for sending packages and emergencies. Please do not call for general information.

Write on the boxes the name and address of sender so we can confirm their arrival.